The book weighs in at 256 pages and is an easy read. It covers Grossman’s early years as a tinkerer and hobbyist brewer all the way to his companies recent plans to expand into the eastern United States.

The book reads almost like three short stories (albeit not fictional) weaved into one book. It may be best to analyze it in that manner.

In the first section of the book we see the skill development of the man that would becoming the leading figure in the craft brewing trade in the United States. Grossman covers his inquisitive nature in his desire to build, tinker and yes even his early experiments in creating alcoholic beverages. Much credit is given in this section of the book to those that were influences to Mr. Grossman’s development. From those that fed his to curiosity to those that encouraged him to pursue his interests, much is made of these early figures in Grossman’s development. He shows us that he is quite a free spirit with a can-do attitude and a skill set that will eventually benefit his foray into entrepreneurship.

In the second part of the book we learn many of the details about the early years of the fledgling Sierra Nevada Brewing Company. We learn in full beer nerd detail how much of the equipment needed to run the brewery was simply not available to the young Mr. Grossman and his business partner Paul Camusi. To overcome this disadvantage, Mr. Grossman does what one would expect of a young business owner – he begs, borrows, buys and often makes or modifies what is needed for the brewery. Equipment, however, turns out to be only one of the businesses problems. From a lack of quality raw ingredients to poor distribution by vendors to a lack of capital to operate and expand the business as necessary. By the end of this part of the book we can see a brewery that is becoming quite successful but at the same time is also starting to see several new problems that were not originally foreseen by the two partners.

The third section of this read is probably best described as a primer for how to run a business. It illustrates several good and several poor decisions made by Grossman and how those decisions have impacted the business. From entering into deals that couldn’t be cancelled, to bringing on to many investors that complicated business decisions to ultimately taking on a partner that lacked the same level of desire and commitment as Grossman himself, we see how inexperience and a lack of formal education caused a great deal of stress to the company, owner and employees.

It would be unfair to discuss the book without addressing some of its shortcomings. While it is understandable, we only get one side of the story on many aspects that clearly have at least one more voice that are necessary. First among these is the soured business relationship between the two partners. I can understand that Grossman may not have wanted to air dirty laundry (or perhaps avoid litigation?) but this failed relationship deserved better coverage in the book. Another area that was touched on in the book, but that I found severely lacking, was the handling of the death of Steve Harrison. Harrison was a key employee of the business and his relationship to Grossman spanned many years which in turn deserves a better treatment.

My last, and greatest, criticism is when Grossman speaks of his management of employee relations. Like many members of management, Grossman seems to buy into his image and PR. While I don’t doubt that his company offers many perks to his employees, and many of these employees have been with the company for several years, reading between the lines shows some cracks in the image that is seemingly presented. It would seem that all employees are well compensated, love and excel at their jobs, and worship at the altar that is Sierra Nevada.

Enough of the negativity. All in all the book is a great read for any true fan of the product and the hobby. It is offers pieces of interest to everyone from the beer hobbyist to the developing entrepreneur. The book reads quickly and likely leaves the reader wanting more – which is often a good thing. I would strongly recommend the book to anyone that is a fan of craft beer, entrepreneurship, history and also the DIY crowd. It’s a great piece of easy reading, and most anyone will find it interesting while perhaps learning a thing or two. 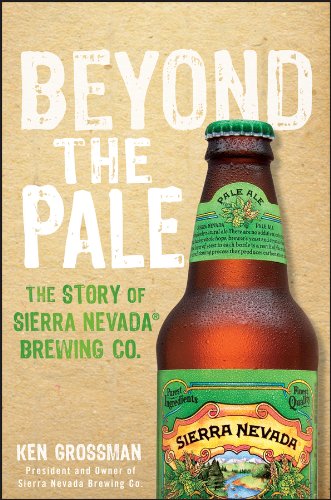